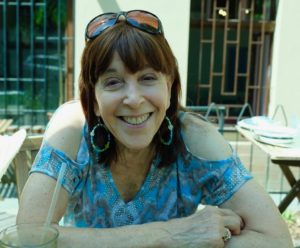 I’m an award-winning journalist, an experienced international journalism trainer and a fledgling podcaster.  I freelance on the digital audio team and as a producer -writer at CNBC .  I spent ten years as a CBS News correspondent and many more years working as a local TV reporter in New York City at WWOR, WNBC and WPIX. For over a decade I’ve lectured at Anglo-American University in Prague, Czech Republic where, with my video-editor husband Frank Herold, I’ve taught street reporting and news video production. I’ve done on-site journalism training for the US State Department and various non profits  –  helping journalists from the Czech Republic, Serbia, Albania, Bosnia and Poland transition to a free press. I own The Fred Group Ltd – a media production and consulting company which does work in both the US and the Czech Republic.  I’m also on the board of the New York City Press Club, the primary organization for newspeople in the NYC area. I’m a graduate of Boston University.  I’m @stephanishelton on Twitter. And you can find me here on LinkedIn.